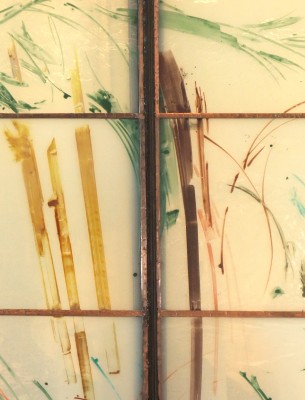 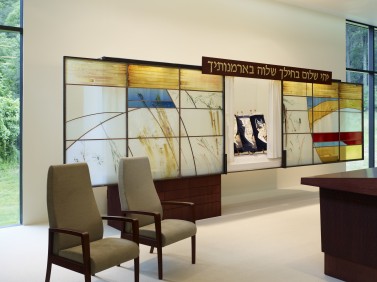 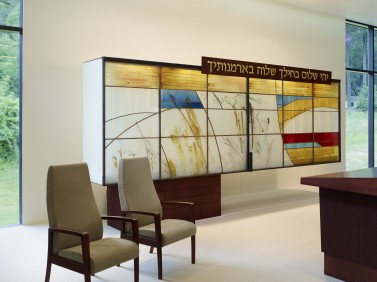 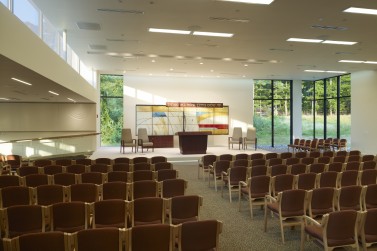 Mandelbaum was invited to design stained glass for a very unusual new project: the Ark at Kol Shalom synagogue. Usually a narrow vertical cabinet, this ark would be horizontal – eighteen feet wide by five feet high. It would fill the full front width of the room. The vision of Architect Salo Levinas, it would be the only art in the sanctuary. This was an honor and also a great responsibility. She needed to solve technical problems but at the same time – whatever the technical difficulties, as an artist she still needed to “pour her love into the making.” Mostly this was with the painting.

At the heart of the ark, where the two doors meet, she says she did her best painting. Using traditional glass paints, which are metal oxides mixed with a vehicle (such as gum arabic or vinegar) and fired for permanence at 1200 degrees, she found several different kinds of paints to produce a variety of soft earth colors and gentle blues. Much of stained glass’s terminology is culled from medieval stained glass techniques. She painted with trace line or overall matt tones playing against beautiful hand made mouth-blown soft translucent white German Opal glass. For this project, clear glass was flashed with a thin white layer to make it translucent instead of transparent, helping to hide the

Torahs as prescribed by tradition. In Jewish practice the Ark holds the Torahs and also hides them until, at special points in the service, the doors are opened to reveal them and closed again. White opal glass was used again as a base for the long band of gold stretching above the ark but here it is white opal reamy – a glass characterized by irregular ripples like flowing water. Mandelbaum painted this glass first with silver stain – a glass paint made with actual silver that comes out transparent yellow when fired at 900 degrees. It is the only kind of paint that sinks into the glass’s surface so that the glass retains its transparency. Silver stain is the source of the word stained glass. The long band at the top unifying all the parts of the ark was created as a symbol of God’s compassion. As it says in the prayer books: “Blessed is the One whose compassion covers the earth and all its creatures.”

This project was both unique and successful. Mandelbaum was delighted to be asked by the congregation to open and close the doors during the Sabbath service the week after the synagogue was dedicated on April 27, 2012. Later, Deb Finkelstein, the administrative head of Kol Shalom, wrote,

“Ellen, clearly from the beginning of the process, possessed the ability to stay true to her art and also to listen to and incorporate the desires and comments of the committee members.  The outcome is an inspiring and distinct design feature that is the focal point in our beautiful new sanctuary.”